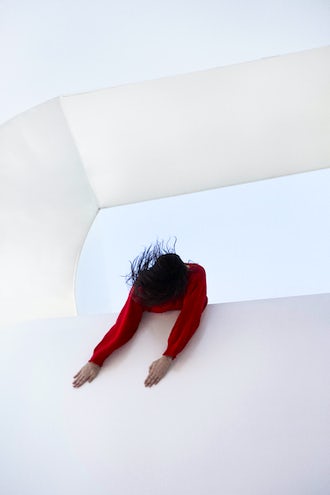 Atomic 3001 depicts a form of physical alienation. A virtual character is subjected to a rhythm, a perpetual and uncontrollable pulsation. A dancing machine is trapped in a futuristic ritual resembling a kind of techno frenzy. There is a being, a sound, a movement. Each sound is a movement, and each movement is a sound. A being who is fully alert; a physical quest for an absolute, for truth behind movement in sound.

Leslie Mannès (Brussels, 1982) is an actress, choreographer, and dancer who holds a diploma from P.A.R.T.S. (Performing Arts Research and Training Studios), Brussels, and from the SEAD (Salzburg Experimental Academy of Dance), in Austria. She lives in Brussels, where she co-founded System Failure with choreographer Louise Baduel in 2012. As a performer, she has been working with the  Mossoux-Bonté company since 2006, as well as with choreographers Ayelen Parolin and Maxence Rey. Her work is motivated by meeting and collaborating with other artists. She enjoys creating futuristic environments that use anticipation as a way of looking at our surroundings differently.