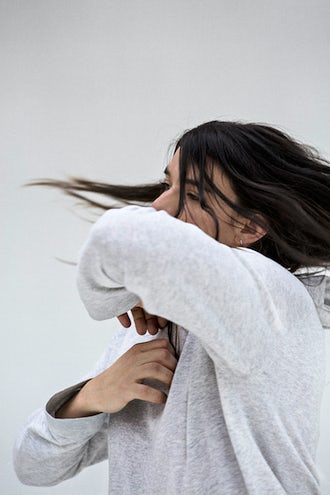 Gone in a Heartbeat explores the tension between multiplicity and unity, composition and instinct, through improvised body language. The choreography has been conceived as four solos who share a single space. Inspired by the body language of rock groups and a range of traditional dances, the performers unconsciously influence each other, through being side by side rather than sharing intentionally, arranging and rearranging themselves in configurations that are both imposing and ephemeral.

After studying classical dance, Louise Vanneste (Louvain-la-Neuve, 1979) turned to contemporary dance and integrated P.A.R.T.S. (Performing Arts Research and Training Studios), in Brussels. Supported by a SPES Foundation (Belgian association which supports creative work) bursary, she pursued her studies with the Trisha Brown Dance company in New York. Her first group work, Sie Kommen, was created in 2008. She then produced HOME, a solo, Persona, a trio, and finally, Black Milk, a duet which received the Prix de la Critique in 2013. Her last play, Therians, was created in June 2017 for the Rencontres Chorégraphiques Internationales de Seine-Saint-Denis, in France.