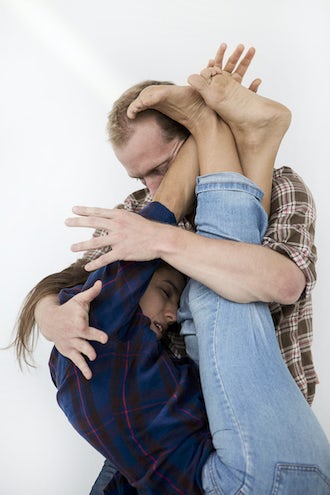 monoLOG is inspired by David Lynch's Log Lady character in his series Twin Peaks. A man is trying to escape the spider that is eating away at him from within, gluing him in place. He doesn't give up; though his body no longer responds, he sends signs of its energy, power, and meaning. Samuel Lefeuvre sees his work as focusing on the figure of the oracle, featuring a character who is at odds with visions and an off-kilter perception of reality.

After studying dance in Caen and the Angers National Centre for Contemporary Dance, Samuel Lefeuvre (Vire, 1981) moved to Brussels, where he integrated the Michèle Anne de Mey Company, and later Les Ballets C de la B (Belgium). He met Franck Chartier and Gabriela Carrizo, founders of Peeping Tom, while preparing Alain Platel's Wolf, and was invited to join their collective for Le Salon (2004) and Le Sous-Sol (2007).