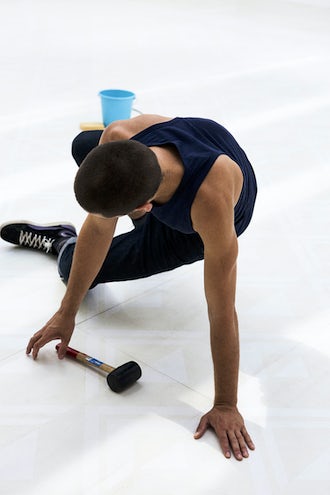 In the beginning, there was nothing, and yet this nothing exploded.

In Multiverse, Louis Vanhaverbeke is a multifunctional disc-jockey. He juggles arguments, thoughts and lyrics, playing beats from the best hits, and churning out references until thoughts bounce off one another and we enter a new dimension. Through slamming, scatting and rhyming, he attempts to question his place in the world.

In 2010, Louis Vanhaverbeke (Ghent, 1988) graduated from Sint-Lucas Gent, atelier Mixed Media (LUCA), and in 2014, from the School voor Nieuwe Dansontwikkeling (SNDO), Amsterdam. His work consists mostly of performances, installations and drawings. He has a keen interest in the clashes between lifestyles and subcultures. He thinks of music not only as a way to express himself, but also as a tool in his search for identity. As a teenager, he switched back and forth between rapper and wannabe rock star. By remixing different ambitions, he developed a very particular vocabulary: freestyle, hard to classify, but very intelligible.