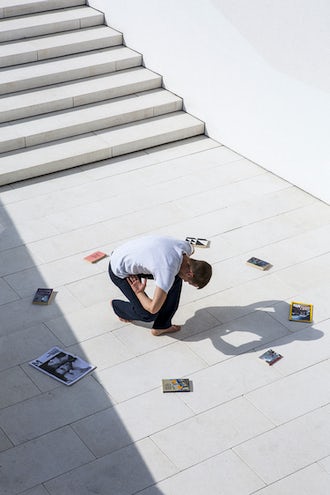 A single body enters the space and starts to spin and become a mad revolving motion. Subjecting himself to trying physical and mental processes, Daniel Linehan creates an inverted black hole, for a moment of giddiness which could be disorientating, but could also be an opportunity for thoughtful consideration, where all these ideas might flow and resonate.

Daniel Linehan (Seattle, 1982) first worked as a dancer and choreographer in New York, before settling in Brussels in 2008, where he became a researcher at P.A.R.T.S. (Performing Arts Research and Training Studio). As a performer, Daniel Linehan has worked with Miguel Gutierrez and Big Art Group, a New York-based experimental performance company. In 2007-2008, he joined a residency at Movement Research (a laboratory devoted to the investigation of dance and movement-based forms in New York). Through his work as a choreographer, Daniel Linehan seeks to gently cloud the boundary that separates dance from everything else.